“Sometimes being a friend means mastering the art of timing. There is a time for silence, a time to let go and allow people to hurl themselves into their own destiny. And a time to prepare to pick up the pieces when it’s all over”.

I’ve been living abroad since 5 years now, always changing countries, cultures and lifestyle. And every time it is always difficult to start from zero. It’s not that i’m afraid, but it scares your mind a bit, especially at the beginning. You can have a good job, that you love, good income, nice home, friends to hang out with but if you don’t have friends who listen to you and viceversa, you don’t have anything.

I am a very social person after my first “silent and observing moments” at the beginning, but I’m very picky and I pick people.  I choose the ones that I want them in my life: hanging out, having fun with, cheering, eating, dancing, talking for hours, watching movies… and listening to them. All this stuff. My family used to tell me “Remember Fede, true friends… you count them on your hands”. And that’s true.. I think I’m actually lucky that I have more than ten true friends, and this is mainly due cause I’ve been living abroad for quite long time: I can always rely on my friends in Italy. Always. But It’s like I need to find people like them in every place I live… and, as said, I am lucky to have found them.

One of them is Sarah (I call her Kirsch): I was living and working with her in Sri Lanka for few months. I already wrote a post about her, so I’m not gonna repeat me here.. the point is that she now lives in Indonesia and I finally got to meet her there, few days ago, when I flew from Colombo to Jakarta, for couple of days. 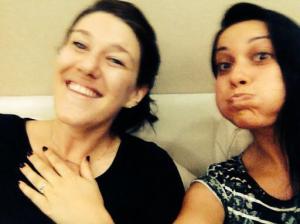 Yes.. I’ve been travelling a lot. I don’t wanna make anyone jealous, I’m always opened to travel with someone, but that happens rarely. So I just go… and what it bothers me sometimes, it’s the way how people think that I never work, or I spend a lot of money, they start wondering my income and so on.

Well. if I travel it means that I can for sure, nobody should judge… just enjoy the pictures that I post! like my true friends and family always say: “travel more and don’t forget to post pictures so that we can travel with you!”. So sweet =) .

Travelling is almost like a drug, you get really dependent and always hungry of discovering more and more places all the time. And I recently found myself avoiding shopping when abroad: I just don’t feel it, not even when I enter Victoria’s Secret shops. This is so weird to me: those shops used to be my weak point. Well, travelling is not a matter of “whatever” shopping, but a matter of discovering.. everything and yourself.

And this time I travelled to visit a new country and a true friend.

I arrived in Jakarta on April 30th: at the airport I was shocked from the arrogance of the people. I guess they don’t like their jobs and don’t even like tourists. Let’s say that most of the people don’t speak english, so this is also a big barrier for them. Anyway I got shocked by two – three small scenes, but the main important one was this:

At the counter, an indonesian guy left his wallet. I saw it and ran after him to give it back. He took it, looked at me and turned his back.

Whaaaaaaaaaaaaaat???? I mean, even if you don’t know english, at least a “Thank you”, no?!

I told him…. of course (I was burning inside). He said “thanks” back.

When outside the airport I asked for a meter taxi, and everybody was “yes yes come with me”. When there I asked about the meter and they started to say “No…bla bla bla..”

Ok, whatever … I got into the right taxi later and after 1.5 hours I arrived at Sarah’s place. Traffic was awful. Really awful.

The next day we woke up at 4am to get into a taxi, then later on a boat like immigrants, waited for almost 2 hours cause of the delay of departure and then 2 hours later we finally reached the place: thousand islands, “Pari Island”.

And what we discovered was.. pretty much a different world. No industry, no bars, no restaurants, no banks, no ATMs, but just a police station, lots of bicycles, chickens walking around, muslim people and few small shops around. 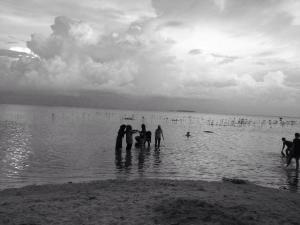 Beach was good, except the fact that it was not the season so the sun was kind of hidden: 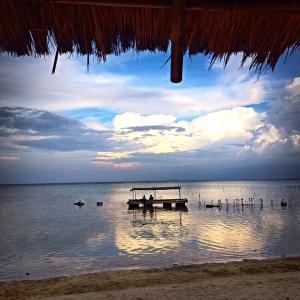 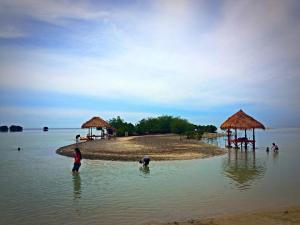 Anyway, I’m the kind of girl who doesn’t have relax in these places. Nice to visit but, let’s go back to civilization please.

And so we did the next day. And we were happy to be back. Especially because we went back on a special speed boat, that we didn’t book the day before, but after some trials, the guy told us “ok, you can go”. =)

When actually we realised that we had to pay upfront AND we didn’t have any money. Guess why?

There was no ATM in the island and we were not prepared for that, so we just took a small amount of money with us.

(Here the pic of my mother yelling at me came to my mind: “You see, I’ve always told you to have cash with you when you go out of home. You never know!” What to say… so true. =P)

We tried to convince them that we would have paid once back at the marina in Jakarta, but the guy didn’t want to. So I called the police, asking for help. Nothing… they didn’t want to let us go on that boat.

(All these conversations were in a very simple english, with italian gestures and some help from Sarah’s indonesian friends).

Anyway, we really wanted to go back. So, that’s it.. I did it. I asked people on the boat to borrow money for us, saying that we would have paid them MORE once in Jakarta.

First attempt didn’t go through, but the second was the right one!!!! =)

Let’s say those guys were really 2 angels, and they did speak english as well. So THANKS again:

I still didn’t tell her, I already know the answer!

Once back in Jakarta we had a really nice night, celebrating us: worldwide friendship and the difference between us and the majority of the girls around.

I don’t mean to offend anyone, I just want to make a point clear: my experiences are not a lot but enough to say that I’ve been seeing that most of the girls, in every country, they all like to appear and they all like rich men. Money is what is important for them.. and the sad thing is that they don’t care to succeed in career, they just get the easy way, marrying a rich man.

LOVE? No way (in most of the cases). Just a fake appearance.

Anyway “Salute” to all the girls that create their own careers and are not afraid to do it: