That day of 5 years ago… I was randomly walking in Rome when I saw a little advertisement with a picture of little cute dogs, saying: ” we are looking for a home”, and a phone number just next to it.

After that call, (positive) troubles began.

It was my third and last year at the university in Rome and I was supposed to move to US after my graduation (about 7 months later). I knew that i couldn’t just take a dog for 7 months, while i was staying as an “expat” in Rome (as I am originally from Follonica, Tuscany). And I also knew it that in my family nobody wanted to have an other dog at home, as my dad had already lots of dogs to take care of.

So I just went to see the little dogs, just cause I was curious… attracted but just curious. Yeah! That’s what I was trying to tell myself and I ended up by taking the dog home (in Rome) and gave her a name: Tayra, as she was beautiful as Tyra Banks, the model.

Of course my family didn’t know anything until summer began and I had to go back to my hometown for few months, and Tayra couldn’t stay in Rome alone, as all of us were “expats” coming from all over Italy and not spending the summer in Rome.

So I did it: I took the train, put Tayra in an open box and went all the way back to Follonica.

All the time I tried to think of an excuse to say to my parents, and convince them to let Tayra stay at home with us…

My dad picked me up at the station, saw the little box with the tiny dog inside, looked at me and said:

“Well, you know dad… i found this dog around home in Rome. She was following me all the time, I tried to get rid of her, but she started crying and i couldn’t leave her there on the street alone. Come on dad, you would have done it as well”

“I don’t believe you, but I hope you already found her a new home, which is not gonna be mine”

Anyway, we made a kind of deal, after lots of discussions: Tayra was staying at home (downstairs, in the garage) for the first weeks, till I found her an other home.

My little Tayra had only a small problem: she was afraid of the dark, and she didn’t want to stay alone in the night, or she started to cry all night long. My parents were so angry and disappointed about that situation that they didn’t want her to stay there anymore… so every night I went sleeping downstairs with Tayra (there was a small bed, i was not sleeping on the ground), so she could have just stayed calm and relaxed the whole night.  =)

” I told you I don’t want pets at home, cause you’ll leave soon and I have to take care of it. And do you think it is easy?! I already have my other 16 dogs to take care of and bla bla bla…”

As Tayra is a mix of Golden Retriever, German Shepherd and something else… I suggested she could do the watchdog for the other dogs. He thought about it, still complaining, but he said ok.

Once I left, my father got really close to her and so did she. Now every step he makes, she just follows him.

From the sweet, frightened little girl that she was, she is now a big girl on fire: still sweet (with the right people) but totally fearless! She eats a lot, she destroys a lot as well and every time I come back home, my dad’s comment is this:

“She eats a lot, she even eats the poor ducks, she fights with Zara (an other female dog): last time there was also blood around, she destroys my vegetable garden, the flowers etc… She is too active, and that reminds me someone!”

Me: ” I never destroyed the garden, maybe sometimes I forgot to give water to the flowers and I let them die”

Dad: “But you did break a glass door of a jewellery shop!”

My dad smiles, turns his back and leaves the room.  (He doesn’t want to show that I am actually right) =)

Grazie Tayra to be with him… and HAPPY BIRTHDAY SPECIAL GIRL! 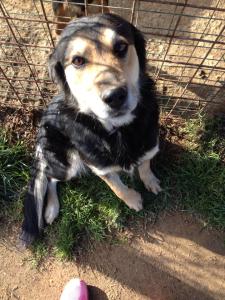 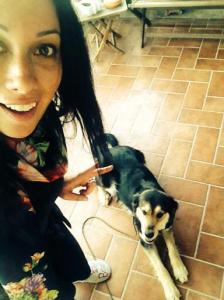