Visiting the historical site of Petra was one of my dream, and still is!

I booked my weekend trip to Jordan from Saudi Arabia, where I am currently living. It’s a 2 hours direct flight with Air Arabia, and very convenient. I was so excited to go to Amman, Petra and the dead sea; I planned everything in order not to miss a thing while there. Time is precious!

As long as this 2016 looks like (a complete disaster), I was so “lucky” to book the only weekend of rain and heavy wind in Jordan, with the consequence that I had to skip going to Petra since it was not worth it then. So, for the moment no tips on Petra and the dead sea, however I discovered something else that it’s less famous but it’s definitely worth a visit. And it’s called Jerash.

Jerash, the Gerasa of Antiquity  is the capital and largest city of Jerash Governorate, which is situated in the north of Jordan, 48 kilometres (30 mi) north of the capital Amman towards Syria. Jerash Governorate’s geographical features vary from cold mountains to fertile valleys from 250 to 300 metres (820 to 980 ft) above sea level, suitable for growing a wide variety of crops.

In the late Ottoman period, the city’s name, Jerash, was abandoned and changed to Sakib,yet this was not a permanent development, as the name Jerash reappeared in Ottoman tax registers by the end of 16th century.

A strong earthquake destroyed in 749 AD large parts of Jerash, while subsequent earthquakes along with wars and turmoil contributed to additional destruction. The ruins remained buried in the soil for hundreds of years until they were discovered by Germans in 1806. – (Wikipedia)

The sun was still missing that day and so the pictures are not shiny, not so many tourists as well, that’s where we could enjoy the site at the best. 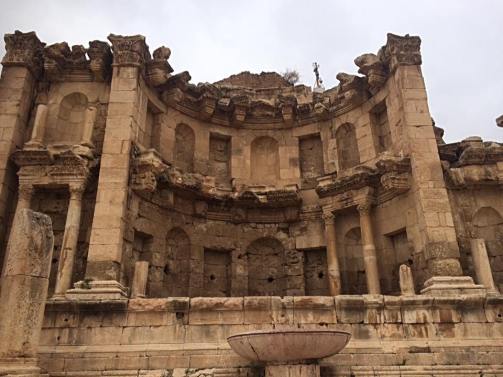 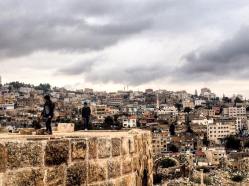 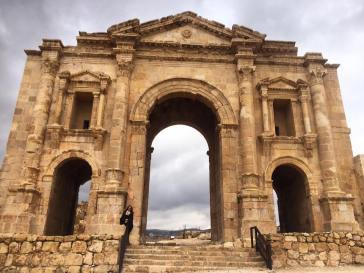 It’s actually the best roman city I’ve seen after Pompei in Italy. If you stop in Jordan make sure you go there! It’s only 40 minutes drive from Amman, and Uber makes the trip very cheap and comfortable.

Oh, by the way.. taxis in Jordan are really cheap, if you can Uber is better but in any case try not to get ripped off from taxi drivers at the airport. A trip from the airport to Amman will cost you no more than 20 JOD more or less.

What took my heart in Amman is Citadel (although it was so cold up there):

The Citadel is considered an important site because it has had a long history of occupation by many great civilisations. Most of the buildings still visible at the site are from the Roman, Byzantine, and Umayyad periods. The major buildings at the site are the Temple of Hercules, a Byzantine church, and the Umayyad Palace.  – (Wikipedia) 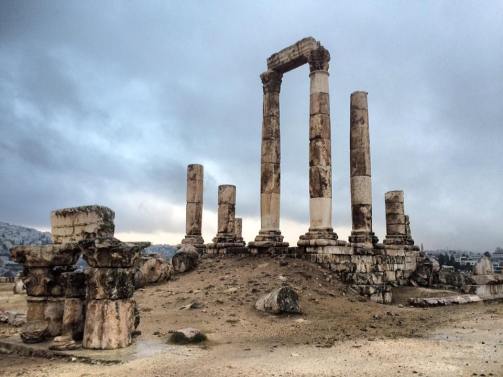 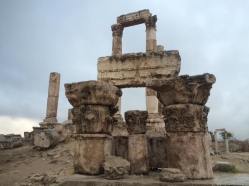 Amman by night is just FUN! People are welcoming and there is basically whatever you need: pubs, clubs, chic rooftops and street food 🙂

I definitely recommend to go to a place called “The Good Pub” for snacks, drinks, dj and live music too! All in one 🙂 No need to say that after almost a month in Saudi with no alcohol, I got “a little bit” wasted after few drinks.

Well Jordan.. I need to visit you again! Petra is still on my bucket list. See you soon!