Definitely an unusual destination to travel to for vacation, but as much as I am passionate about adventures, misadventures and emerging markets economies, well, Djibouti was a must for me. 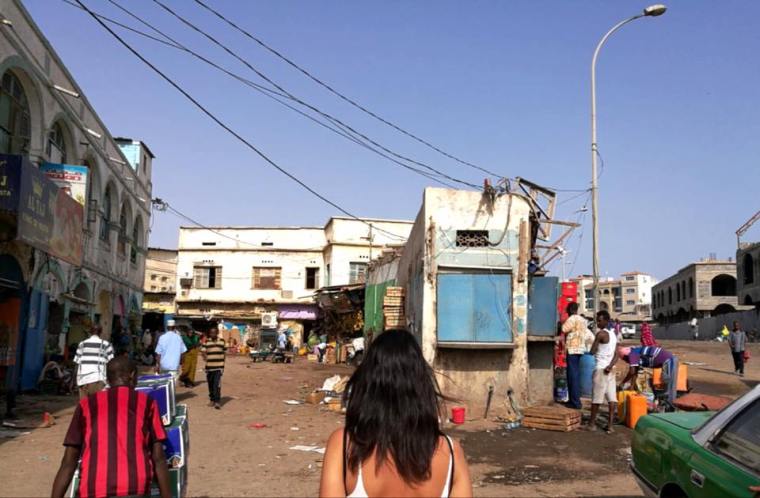 Well known for being one of the few bases of Legione étrangère, when it was still a French colony, as well as for being the tiniest country with the biggest military bases on earth.

“You’re going to a quiet place” – this was the main rhetorical reaction from people, after realising what kind of destination that was.

In fact, Djibouti is probably one of the most quiet and safest country I’ve ever visited (after Japan).

My journey to this land starts just after Kenya on a quick flight from Mombasa with a layover in Addis Abeba, Ethiopia.

Visa procedure is quite easy to get as there is the option to have visa on arrival, which costs around 80 euro: I got quite lucky as immigration did not ask me many questions, while my Swedish friend who arrived just some hours before me has been asked many docs and questions, so the procedure took quite a lot of time.

It is important to say that Djibouti is not a touristic destination, therefore even immigration gets quite shocked when pure tourists show up, with no business invitation. However we both got the permit to enter the country… and the discover could finally begin!

The city itself (Djibouti city) is a bit expensive so we did not chose to stay at Sheraton or Kempinski Hotel (the main international hotels in town) and decided to try a residence apartment in the heart of the city: Lagoon Bleu Hotel. And I must say it was not bad at all.

People were kind and funny, as they recognised I was Italian, they started to wave me saying “Ciao Mafia” every single time I was coming out of the residence – it can be shocking if you’re not used to, but that’s what we, Italians, are (unfortunately) also famous of! 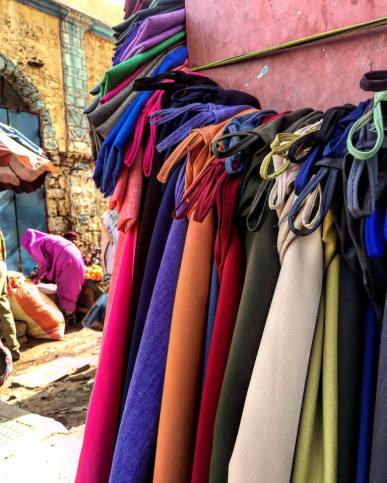 The market was an adventure itself! Could not take many pictures as police men were coming all the time to tell us to stop taking photos as it was forbidden!

Well, nobody told us this before, nor it was written in some kind of signs. I asked why they were saying like this, but had no exact reply of it. Before even adventuring into the market, I went to the street on the first morning, while waiting for my friend, and started to look around. I am very into flags, and I love taking pics of them: suddenly I ran into a normal building with the Djibouti flag on it – took out my phone and shoot a pic.

“L’avessi mai fatto!” – we say in Italian when realising that something wrong has just happened.

In fact, I had 3 policemen just behind me who called me asking why I was taking a picture of the flag. Without thinking that it was a problem , I sincerely explained my love for flags and pictures. Two of them started saying that I should not have done it, as it was strictly forbidden. Clearly I said: “Okay, sorry . I will delete the picture in front of you.” But they kept going on and on, until the third police guy told me “That’s okay, you can go”.

Shocked enough, I went back to the residence, explained this fact to my friend and thinking that the problem was just because of the “flag” we kept taking pics here and there and finally find out that it was forbidden also to take pics in the whole downtown area.

I probably know the reason now, but I won’t share it. 🙂

Thanks to some kind Italian people we met there we could have tips on where to go and how to reach some places. Our second day was at my so desired Lac Assal, a national treasure: 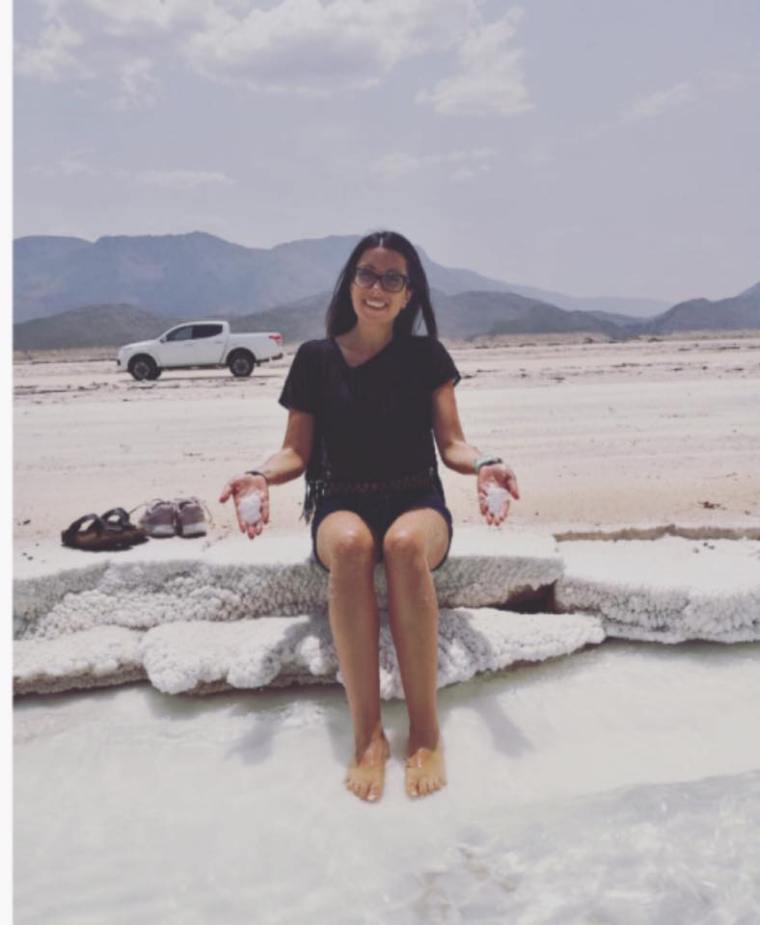 “Lake Assal is a saline lake which lies 155 m (509 ft) below sea level in the Afar Triangle, making it the lowest point on land in Africa and the third-lowest point on Earth after the Sea of Galilee and the Dead Sea.” – Wikipedia

Reaching the lake during August is almost like suiciding yourself, as the temperature can reach up to 60° degrees. It was super super hot! However the journey was really worth it – I still consider Lac Assal as one of the most beautiful places I’ve visited on earth (Mars is on my bucket list 😛 ). 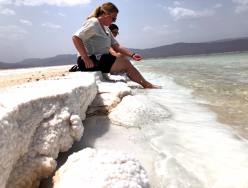 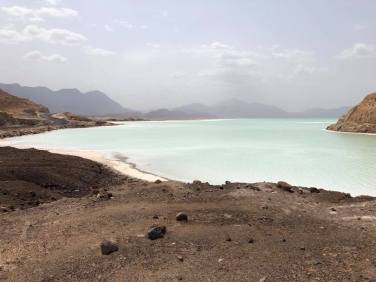 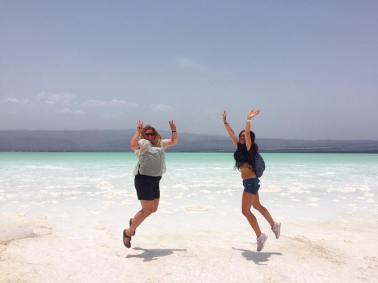 We did not have time to visit Lake Abbe, on the Ethiopian border.. but that’s also an excuse to go back to Djibouti next time!

The next day we had a lovely taste of how a real relaxing day feels like: Moucha Island was indeed a paradise for eremites. Nobody was there, except one fisherman living there, who was kind enough to offer us food (fresh fish and some tuna noodles).

It felt like being so far away from thoughts, problems, real life.. we were stunned by the great beauty of this natural simplicity! 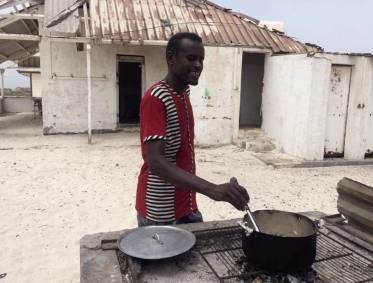 Reaching the island is not difficult itself, but you need to have contacts or know who to call to be able to rent the boat taking you there. There were no tourists (of course) or no other people willing to go there that day, so we ended up renting the small boat just for the two of us and that’s why the price went up a bit (100 USD each, more or less).

But again, worth the price!!

Sunset, we could not miss it! Kempinski Hotel is probably the best venue to admire the sunset both from the rooftop or from the pool area. No noise, just you and the golden hour! Perfect.

French (or Arabic) is a must to visit Djbouti, taking into consideration that it was a French colony, everybody are most likely to speak French, though their mother language is Arabic.

My journey ends at the airport where customs stopped me even before entering it, asking for my passport. They checked page after page, questioning me:

“You’re Italian. Are you a militar?”

“Federica, who are you?

And, with a shocking face, they let me go. XD

Djibouti, it was soooo much fun! I hope that more people can come visiting you, but please, stay the same untouched, so natural DJIBOUTI. Don’t go touristic!